Pruitt had 14 points and Trent Meacham 13 for Illinois (7-4), which has an eight-game winning streak in the annual holiday season neutral-site game. Illinois carried the play at the start of both halves, scoring the game’s first nine points and then running off seven straight after the break, but Missouri (8-4) recovered each time.

Leo Lyons had 15 points before fouling out with 1:36 to go for Missouri. Keon Lawrence  dribbled the ball off his foot and out of bounds as time expired, near the same spot where Stefhon Hannah turned it over with two seconds left in Illinois’ 3-point victory last year. 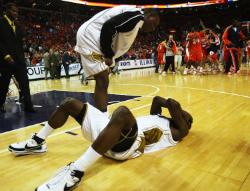 Missouri, which entered the game with a three-game winning streak, was undone by season-worst 34.5-percent shooting. Three of Missouri’s losses have been by a combined seven points. The Tigers had their season low for scoring after entering the game with a Big 12-leading 84.5-point average.

Hannah, held to a season-low eight points on 2-for-12 shooting, also had a shot blocked with 18.6 seconds to go. Pruitt scored 10 of Illinois’ first 19 points, then went without a point or shot for more than 25 minutes. Meacham was 4-for-4 with 11 points in the first half, topping his 10.6-point average, but missed all four shots the rest of the way.

DeMarre Carroll had 10 points and eight rebounds for Missouri, but was held to 2-for-10 shooting.

Illinois scored the game’s first nine points and opened the second half with seven straight to open the game’s biggest lead at 43-33 with 16:25 to go.

Previous Post: « Devlin Will Stay in Missouri
Next Post: Donnelly Vows to Press On With Her Suit Against Ethics Commission »