The Rams will hold a halftime ceremony for their Super Bowl running back Marshall Faulk by honoring him with the retirement of his jersey number 28.  Faulk apart of the Greatest Show On Turf spoke yesterday at a press conference.  Below are some of his comments.  Photo courtesy of Bill Greenblatt, UPI. 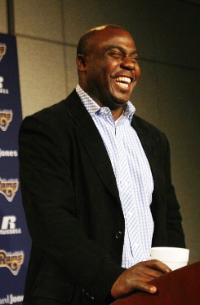 "It’s a pleasure being back. The question I get asked, other than how is retirement, is going to deal with having my jersey retired. I don’t even think about it. I get asked questions about accolades, when playing and even now, but I don’t really think about it. Sometimes you never know how things are going to affect you or how you’re going to think about them or how it’s going to be perceived by yourself.

"Yesterday in the meeting room we were sitting down and I was telling Deion (Sanders) that I have to do this and that. He said that not many people get their number retired. I was sitting up there and we were walking through the hall and I said to myself that that was kind of true. I’m sure leading up to tomorrow it will reflect on me more and more. I will probably have more to say about it. It’s a very special occasion for me. I am without a doubt honored that the Rams chose my number and chose me and our awarding me with the right to retire the No. 28."

(On what it means to have his number retired)

"It means a lot because as a kid playing football you think about winning a Super Bowl, scoring touchdowns or just playing in the NFL. To get your number retired is an honor you don’t even think about – while sitting in the meeting room with the guys, you think about that someday this number is not going to exist for anyone else and it will hang in the rafters. It doesn’t resonate to how and what you feel at that point and time. As I move on in my career of broadcasting, thinking about it, seeing it and hearing it, each year further away from the game, it will become more and more special."

"Yes it is. In those guys, especially Torry (Holt) and Isaac (Bruce) because the three of us spent so much time in that huddle along with Orlando (Pace) looking at each other not questioning who was going to make the play, it was when the play was going to be made. It was not asking each other to step up but just making plays and doing things. Not riding each others back about preparing and making sure that our jobs were getting done, it just went without saying. We knew that we weren’t going to let each other down. To see them still here is good. It is good. To have them there tomorrow is special."

(On how often he thinks about the Hall of Fame)

"I hadn’t thought about up until last year when I was there. I think that every year when we go to do our show at the Hall of Fame it will definitely register. Being honest, the guys that are in the Hall of Fame, I can never see myself with those guys. I look at them and I think that they embody what football is all about especially when you look back in the day with what those guys went through, how the game was before you made the money that we make now, that they make now. You played this game because you loved it, you had a second job, you enjoyed it and that was what it was all about. I just don’t see myself, never have, with the likes of those guys. Until that day comes then I will think about it but outside of that, there is not much thought that is given because the only thing I know is that it is out of my control. I had 13 years to have it in my control and now it is not."

(On what he thinks was the greatest thing about his career)

"It varies, there is on the field, there is off the field, there is maturing as a person. The one thing I probably never ever talk about was the fact that I had an opportunity that a lot of people don’t get and some do. As a young player there is a perception about you. Sometimes you create the perception and sometimes you create the perception and sometimes the perception creates itself. In Indianapolis I felt like it was ‘just me.’ That ‘just me’ mentality sometimes creates a selfishness as to you wanting the ball and you want to make sure it gets done because you want to win. I was fortunate enough to come here to the Rams where there were guys that were in the same year as me, Isaac (Bruce), Orlando (Pace), Grant (Wistrom), Keith Lyle. We all had the same agenda of just wanting to win and didn’t care who it was. I had an opportunity to kind of redefine who I was and let people know that wasn’t me. It was the hunger and the desire and the thirst to want to win that created that beast. Coming here it was an opportunity for me to have people see it in the way that it really is, even if back then I expressed it in the wrong way by coming off bad. My focus was definitely on playing and winning it wasn’t on addressing the media always. That is why most of the time I really didn’t have much to say. That opportunity without a doubt, redefining myself within the same game with the same job just with a different team and making that outlook on how people viewed me much, much different was probably the thing that I am most proud of."

(On how many touchdown balls he has)

"Not many anymore. They were all in the house down in New Orleans, but it’s okay. It’s alright. The memories are still there."