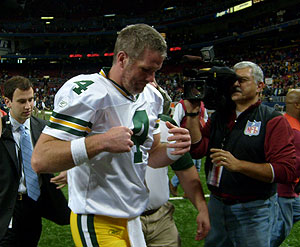 It was one of those classic mismatches – the 11-2 Green Bay Packers visiting the Edward Jones Dome to play the 3-10 St. Louis Rams. And, the Packers won 33-14. It was much anticipated because this would probably be the last chance to see future Hall of Famer Brett Favre playing in St. Louis. And, there was a chance to see history made as Favre, starting his 253rd straight game (273rd counting playoffs), entered the contest needing just 184 passing yards to move into first place in that category in the NFL record book. Dan Marino held the record at 61,361.

And, there were more than a few Green Bay fans among the 66,008 in the sellout crowd. Judging from the reaction following key scoring plays, it was hard to tell whether Green Bay fans outnumbered Rams’ supporters – or perhaps they were just a little less reserved than the St. Louis regulars. Some of the fans of the Pack were locals who like the idea of cheering for a winner, while others actually made the trek from Wisconsin to St. Louis. Just about all of the Packers’ fans wore Green Bay uniform jerseys or caps. The ones visiting from the Badger State stood out by the rather odd-looking appendage to their heads – the popular cheese triangle. These Cheese Heads do love to travel!

The Packers struck first on their first possession of the game. Koren Robinson ran back the opening kickoff 43 yards to the St. Louis 48. From there, Favre engineered a 9 play, 52 yard scoring drive that ended when Ryan Grant ran it into the end zone for 6 points. Mason Crosby’s convert attempt was good, making it Green Bay 7, St. Louis 0.

The Rams went 3 and out on their first possession, but when they got the ball for a second time, Marc Bulger connected with Torry Holt for a 4 yard touchdown pass that put the finishing touches on an 11 play, 65 yard drive. Jeff Wilkins booted the extra point to even the store; St. Louis 7, Green Bay 7.

The 1st quarter ended with the score tied at 7, but the Pack moved back into the lead on the next possession as Favre passed 4 yards to Donald Lee to finish a 4 play, 45 yard scoring drive. The Crosby PAT made it Green Bay 14, St. Louis 7.

Not to be outdone, the Rams responded with a second TD of their own as Steven Jackson ran 46 yards to paydirt to cap a 7 play, 84 yard scoring drive. Jeff Wilkins point after tied the score at 14.

The Packers moved ahead as the 1st half neared an end. A Mason Crosby 44 yard field goal completed a 7 play, 19 yard drive to make the score Green Bay 17, St. Louis 14. That’s how the half ended as the teams went to their locker rooms.

In the 3rd quarter, the Pack put 3 more points on the board as Crosby sliced the uprights with a 50 yard field goal to end a 4 play, 4 yard scoring drive. It made the score Packers 20, Rams 14.

History was made on the next Packer scoring drive as Green Bay scored a touchdown on a 44 yard, 3 play drive to make the score 27-14 for the Pack. It was capped by a 44 yard pass from Favre to a wide open Greg Jennings for a touchdown with a Crosby conversion. The 44 yard pass gave Favre 61,362 passing yards, 1 ahead of Dan Marino in the NFL record book.

The teams entered the 4th quarter with the Packers ahead 27-14. It was only when the Packer offense returned to the field that the PA announcer told the crowd that Favre had passed Marino on the all-time passing yards list, prompting a standing ovation from Packers and Rams fans alike.

It was on that next possession that the Packers scored 3 more points as Crosby hit a 25 yard field goal to cap a 7 play, 55 yard drive, as Green Bay went ahead of St. Louis by a score of 30-14. Crosby nailed one more field goal, from 46 yards out, to wrap up a 5 play, 20 yard drive. The final scoring play of the game made it Green Bay 33, St. Louis 14.

The Rams get back into action Thursday night, when they play their final home game of the season, hosting the Pittsburgh Steelers.