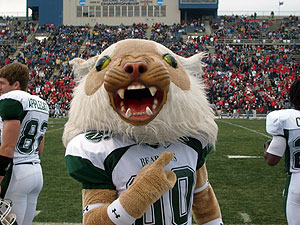 Florence, AL – The third time was anything but a charm for the Northwest Missouri State Bearcats as they came close, but had victory snatched away from them by the Valdosta State Blazers in the NCAA Division II National Championship Football Game at Braley Municipal Stadium in Florence, Alabama.

The #8 Blazers scored the winning points with just :22 left in the 4th quarter to defeat the #5 Bearcats 25-20. It was the third straight year Northwest Missouri State had gone South to Alabama for the National Championship and it was the third straight time the Bearcats failed to come away with the title, having lost the previous two finals to the Grand Valley State Lakers. Interestingly enough, the Bearcats earned a spot in this year finale by defeating the defending national champion Lakers last Saturday night in Maryville.

Valdosta State got on the board first, scoring on its first possession as Zac Williams nailed a 35 yard field goal to cap an 8 play, 50 yard opening drive. The 1st quarter ended with the Blazers leading 3-0.

Early in the 2nd quarter the Bearcats got on the board as Aldwin Foster-Rettig picked off a Willie Copeland pass and returned it to the end zone for 6. Tommy Frevert’s extra point made it NWMSU 7, VSU 3.

The Bearcats scored again with just :21 left in the half as Mike Peterson grabbed a 3 yard pass from Joel Osborn to put the finishing touches on a 4 play, 53 yard drive. Frevert’s PAT made it Northwest Missouri State 14, Valdosta State 3 at the half.

The Blazers had the only score of the 3rd quarter as Clay Callaway caught a 7 yard TD pass from Copeland to end a 6 play, 44 yard drive. Williams’ kick narrowed Northwest Missouri State’s lead to 14-10.

Not to be outdone, Northwest Missouri State came charging back to score on a 3 play, 48 yard drive in just :48 as Xavier Oman took it in from the 2 yard line to make it Bearcats 20, Blazers 17. But the excitement of that TD wasn’t over. Frevert’s PAT, usually routine, was blocked and returned to the NWMSU end zone by Roger King, making it a 1 point game: Bearcats 20, Blazers 19.

The Blazers crewed up more than 3-and-a-half minutes as they constructed an 8 play, 37 yard drive to score the winning touchdown, with Michael Terry running it in from 1 yard out. The conversion attempt, a rush, failed. But it didn’t matter as only :22 seconds remained and the Bearcats were unable to score. The icing on the cake came when Osborn’s desperate pass attempt was intercepted by William Montford. One knee was all that was necessary to end the game, give Valdosta State the championship, and deny Northwest Missouri State an opportunity to return to Maryville with the National Championship Trophy.

One of the keys to the Blazers’ victory was their ability to bottle up Xavier Oman. While the X-Man scored a touchdown on a 1 yard run, he was held to just 71 yards – 63 net yards – on 21 carries.

The Bearcats can take pride in another tremendous season, finishing 12-2, and looking ahead to a fourth trip to "The Shoals" in 2008.