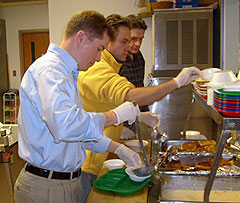 Governor Matt Blunt (R-MO) has mobilized 50 National Guardsmen and women to Northwest Missouri to help those affected by the severe winter weather.

The Governor made the announcement during a visit to a Salvation Army shelter in Jefferson City, where he helped serve lunch to some mid-Missourians warming up from the nasty weather.

Tens of thousands of homes in Northwest Missouri are without electricity following the most recent winter storm that blasted the region early Tuesday morning. The Governor says the situation is still very bad in many parts of the state, especially along the northern tier.

The members of the Guard headed to Northwest Missouri had been sent to Columbia, last night, to be deployed to where they would be most needed. Once they get to Chillicothe, the Guard members will support the ice storm response to any emergency situations that might arise.