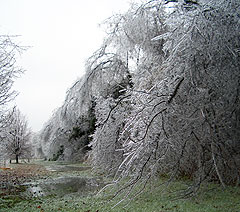 Governor Blunt has declared a state of emergency as Missouri attempts to recover from the ice storm that knocked out power for tens of thousands of residents Sunday. Even as the state attempts to recover, more severe weather is forecast with no let-up predicted until perhaps Tuesday evening.

Blunt issued two executive orders on Sunday. One activates the State Emergency Operations Center outside Jefferson City and allows state agency resources to be used to assist local governments in their recovery efforts. The second activates the Missouri National Guard on an as-needed basis to protest life and property and to support civilian authorities.

Reports indicate that the ice storm hit hard central and northeast Missouri as well as the southwestern portion of the state. As many as 44,000 AmerenUE customers lost power on Sunday, as many as 15,000 in Jefferson City alone. Much of the damage came as heavy rains fell early Sunday morning. The temperature dropped and ice coated tree limbs and power lines. Many power lines snapped on their own. Some were brought down when overhanging limbs broke and clipped them. The storm also took out sub-stations.

The most discouraging news comes with the forecast. The National Weather Service has issued an advisory for Monday night and Tuesday when it expects another round of freezing rain to hit the state. The upper level storm system which produced the ice storm is expected to return with another significant ice storm possible. The Weather Service says the storm has the potential to produce damaging accumulations of ice.

The Missouri Department of Transportation reports most major roads in the state are clear, with a few ice covered. [ Photos of ice damage in mid-Missouri ]