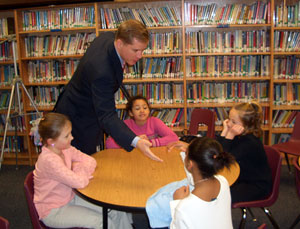 Governor Blunt says strong state revenue encourages him to propose a four percent increase in school funding next year, even though some signs indicate the economy might be slowing.

Blunt says the state economy remains strong, bringing in adequate tax revenue to support such an increase. Blunt says education is his top spending priority, "My budgets are built around education funding, because it is an important long-term investment for the state to make."

State revenue numbers support Blunt’s contention that the Missouri economy will produce enough revenue to support his proposed education spending increase. Yet, many economists worry about a few troubling economic indicators. Blunt acknowledges that the sub-prime mortgage mess worries him. He is quick to add, though, that it appears the housing market has been slowed, but that fewer Missourians have lost equity in their homes than residents in other states.

Another point made by Blunt is the cushion he left in the current budget. The legislature this past session approved Blunt’s recommendation to leave a $200 million cushion in the state budget that could be used should the economy slow and revenue into state coffers fall.