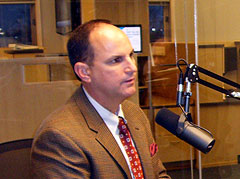 He spent 17 years promoting sports at the University of Missouri. Now he finds himself rooting against his former school in one of the biggest football games in its history.

Castiglione’s visit comes during one of the biggest weeks for Missouri football as it prepares to play the Oklahoma Sooners for the Big 12 Conference championship and possibly a shot at the national championship. Castiglione began his career at MU as a marketing director and worked as an assistant Athletic Director until 1993 when he became the AD at MU. He left in 1998 to become the OU AD.

The investment in upgraded facilities that helped revive Tiger football began under Castiglione and he says the program turn-around came about because people bought into a vision at a time when few could dream of a week like this one. Castiglione says MU came back, because people believed in the football program. He says he thinks about those people who are reaping the rewards for putting hard work into turning that vision into reality.

Castiglione jokes that that’s as far as his praise for the MU program will go, because, though Castiglione has fond memories of Mizzou, it’s OU he’ll be rooting for Saturday night.