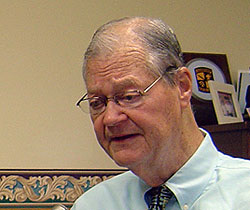 Pakistani President General Pervez Musharraf has now freed thousands of opponents from jails in a sign he is rolling back a wave of repression under emergency rule. Musharraf has cracked down on opposition and suppressed civil rights since making the declaration. He has called for parliamentary elections January 8 th .

Skelton says the rise of former Prime Minister Benazir Bhutto has added another layer to the intrigue. Skelton says Bhutto is someone opposition could rally around and could cause the current government problems. Bhutto has deferred a decision on whether to boycott the elections. The US is hoping those elections produce a moderate government that can stand up to Pakistan’s rising Islamic extremism.

Skelton, chairman of the House Armed Services Committee, says Pakistan’s location makes it vital to our strategic interests. He notes that it borders Afghanistan and is vital in the war against terrorism. Skelton says the United States very much has an interest in a stable Pakistan, not one broiled in controversy.