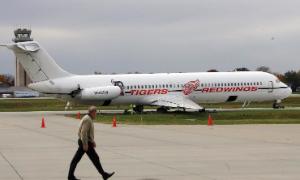 After the Blues beat the Red Wings 4-3 the other night, the team plane was making it’s way down the tarmac at the St. Louis downtown airport in Cahokia, when the pilot must have cut a turn a little too tight getting the plane stuck in the mud.  No one was injured, other than the pilot’s bruised ego.  The team went back to a St. Louis hotel and spent the night.
(Detroit Red Wings Team Plane, Bill Greenblatt, UPI)