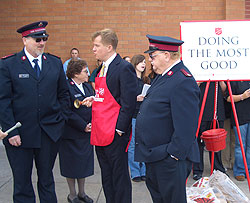 Governor Matt Blunt joined Captain Terry Selvage, Major George Windham, and other members of the Jefferson City Salvation Army today, in ringing the bell for the annual Tree of Lights Campaign.  The Governor stood outside the local Schnuck’s grocery store, along with the Lewis and Clark Middle School Choir, and as he took his turn ringing the bell, talked about the important work of the Salvation Army, and what a privilege it is for him to help out in this way.

Governor Blunt also said he hopes his son will someday follow in his footsteps as a bell ringer, and supporter of organizations such as the Salvation Army.  The local Salvation Army is hoping to raise $165-thousand dollars in their campaign this year.