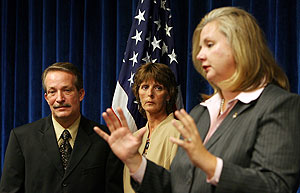 No apologies … No regrets … No acknowledgement that the parents of his victims were with him in the courtroom. Michael Devlin’s life prison terms keep adding up as he pleads guilty in four courtrooms to kidnapping and sexually abusing two boys for the last four years.

The mother of one of the boys, Pam Akers, says Devlin’s behavior shows he’s a coward, and the only thing he is sorry for is getting caught.

She’s the mother of Shawn Hornbeck, who was Devlin’s captive for about four years. Devlin has admitted he tried to choke Hornbeck to death once but the boy talked him out of it.

Judges in three counties have sentenced him to 74 life prison terms plus 80 years.