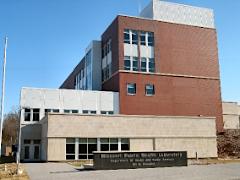 A new, $32 million dollar state health lab has been dedicated in Jefferson City. It is a  high-tech, upgraded facility will serve both the state and the nation.

The lab provides a wide range of diagnostic and analytical services. Scientists and lab technicians moved in at the end of July. State Lab Director, Eric Banks, says the lab has been everything he thought it would be. The new lab is located just outside the walls of the old prison in Jefferson City, east of the Capitol.