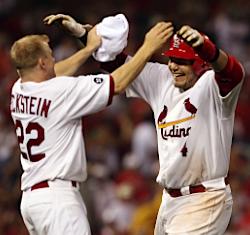 It was Yadier Molina bobblehead night at Busch Stadium and Molina celebrated the event by picking up three hits including his single in the bottom of the 10th to score Miguel Cairo and give the Cardinals a 2-1 win over Philadelphia.

Adam Wainwright’s best pitching has come during his last nine starts over the last two months.  In August he was 2-1 with an ERA of 2.00 and in September, his record is 1-2, but his ERA is right there at 2.03. [Photo by Bill Greenblatt/UPI]

Previous Post: « More Surgery For Mulder, Pujols May Miss The Rest Of The Season
Next Post: 14 Arrested in Conservation Department Investigation »