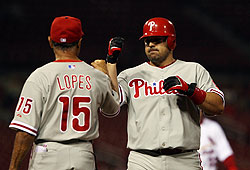 Same ole, same ole.  The Cards put up another great fight and yet somehow come up short.  This time, extra innings as the Phillies win 7-4 in 14 innings.  The Cardinals set a NL record using eleven different pitchers and tied a NL record by using 28 players, yet somehow couldn’t pull it together.

The Phillies tied the game at three in the sixth and took a 4-3 lead in the 10th.  Brett Myers blew a save opportunity as Scott Speizio hit a sacrfice fly to tie the game.  However, in the 14th, the Phillies scored three runs off of Mike Maroth who gave up a RBI single with two outs before being lifted.

It didn’t help that two of the Cardinals hottest hitters (OK only hitters) weren’t in the lineup.  Albert Pujols was a late scratch with a calf strain.  He’s been hitting .372 since September 7th, and Jim Edmonds was nursing an injury hitting a respectible .278.  Outside of that none of the Cardinal regulars are hitting over .263. [Photo by Bill Greenblatt/UPI]