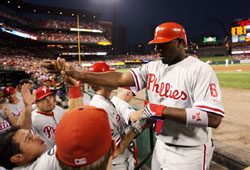 What looked like a laugher for the Phillies, turned into a thrilling shoot out at Busch Stadium.  Ryan Howard put the Phillies up one nothing in the 2nd.  In the fourth, Aaron Rowand and Jimmy Rollins went deep to make it a 5-0 game.  Cards starter Brad Thompson went just 3 1/3 innings.  In the 5th with Anthony Reyes on the mound, Ryan Howard went deep again, this time a two out grand slam which made the score 11-0.  That’s when the Cardinals started chipping away.  Three in the sixth, a six run 7th inning off four singles, an error, sacrifice fly and a big two run double by Albert Pujols.  Skip Schumaker singled in the 8th with two outs to bring the Cardinals to within one, but the Phillies added an insurance run in the 9thto close out this crazy one 13-11.

With the loss, the Cardinals are now 8 games behind the first place Cubs.  As of now, any combination of five Cubs wins and/or five Cardinal losses will eliminate St.Louis from post-season play.