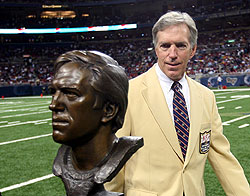 One of the gridiron greats from the old St. Louis Cardinals has been honored with entry into the St. Louis ring of Fame.  Roger Wehrli, who was inducted into the Pro Football Hall of Fame earlier this year, joins a list of Rams and Cardinals who are now Pro Football Hall of Famers.  His name was added to Ring of Fame at the Edward Jones Dome during halftime ceremonies of Sunday’s St. Louis Rams-San Francisco 49ers game.