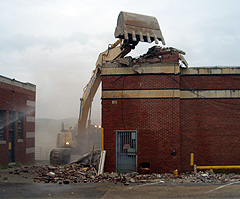 Demolition is underway at the old Missouri State Penitentiary just east of the Capitol in Jefferson City, with much of the old prison making way for a new development.

A huge mechanical crane is taking bites out of one of the brick buildings standing where a new $71 million federal courthouse will be built. The Missouri State Penitentiary first welcomed prisoners in 1836 and operated until 2004 when a new prison opened just outside of Jefferson City. Nearly all the 52 buildings on the 142 acre prison site will be demolished, with only the most historic remaining. They will be renovated, most likely for Corrections Department offices.

Rep. Mark Bruns (R-Jefferson City) says the rest will become a new development. He envisions new office and retail space and says there are unlimited possibilities for the ground. The redevelopment has been underway for some time says Jefferson City Mayor John Landwehr who says he’s excited about the public finally getting to see evidence of what has been going on behind the scenes for some time. Landwehr says one of the real bonuses of the current demolition is that the public will be able to see the original prison entrance for the first time in years.