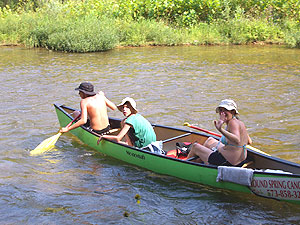 More than 16 million people visit Missouri’s 83 state parks and historic sites each year. And, they’ll soon have an opportunity to visit an 84th. The Department of Conservation and the Department of Natural Resources are working together to create a new state park along the Current River, north of Eminence, in Shannon County.

Governor Matt Blunt (R-MO) says the two departments are now joining forces to design a plan to make the new park, in an area currently controlled by the Conservation Department, a reality for visitors to enjoy for generations to come.

Conservation Department Director John Hoskins says the work begins in short order, but adds it’s difficult to say when the park will actually open to visitors. It’s going to be developed on the site of the historic Alton Club / Jerry J. Presley Conservation Education Center. The Alton Club was built in the 1930s as a corporate retreat for the Alton Box Board Company.

DNR Director Doyle Childers says it’s going to take some work to get this area ready for visitors regarding such things as safety standards and sewer and water issues.

Missouri has not had a state park along the Current River since 1968 when Big Spring, Round Spring, and Alley Spring state parks were transferred to the National Parks Service to serve as the cornerstone of the Ozark National Scenic Riverways . Missouri’s state park system currently has an annual economic impact of $534-Million. [ Photo by Steve Walsh ]