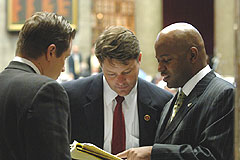 An economic development bill and a fix to allow a major bridge improvement program to move forward have easily passed the House, the first half of the journey through a special legislative session.

A 129-to-20 vote approves a scaled down version of the economic development bill approved by the legislature in regular session, but vetoed by Governor Blunt. Representative Ron Richard of Joplin is pleased with the support of the $70 million tax incentive package, but not surprised. Richard says the bill has always enjoyed bipartisan support in the House.

HB 1 is a slimmer version of the HB 327 approved by the legislature in regular session. Blunt vetoed the original version, saying it was too broad and objecting to its $200 million price tag. Blunt negotiated with legislative leaders, securing agreement on compromise language before agreeing to call the legislature back to Jefferson City to deal with the issue.

Blunt issued a narrow call for the special session, an attempt to mold the package in such a way that the legislature wouldn’t stray from the compromise language. House Republicans interpreted that call narrowly and ruled out-of-order ten amendments offered by Democrats, each time declaring that the amendments went beyond the scope of the governor’s call. Democrats criticized the rulings as allowing the executive branch of government to have too much say in the legislative process.

In-coming House Democrat leader, Paul LeVota of Independence, says Democrats favor the bill, they just wonder why a special session was needed. LeVota contends that if the governor had shown more leadership in the final weeks of the regular session he could have guided the legislature to approve a version he could sign.

The House has also approved HB 2 , bridge bonding bill, on a vote of 135-to-14. The two bills now move to the Senate. If the Senate approves them without changes, they go to the governor. If not, the House will return next week to consider Senate changes.