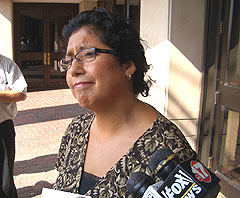 An initiative similar to 2006’s Amendment 2, which dealt with stem cell research, could be on the ballot in November of 2008, if not earlier.

A group known as "Cures Without Cloning" has filed papers with the Secretary of State’s office to start the process that the group will lead to its effort to, in its words, "clarify the language" approved by voters who cast ballots in favor of Amendment 2, which authorizes all forms of stem cell research legal under federal law.

Doctor Lori Buffa, Chair of "Cures Without Cloning," says approvement of Amendment 2 allows what she considers certain forms of cloning through a process known as Somatic Cell Nuclear Transfer, and she says that is not what voters intended.

This ballot initiative is a long way from being a done deal. The initial language has been presented to the Secretary of State for approval. If the language is approved, supporters would then be allowed to begin collecting signatures for the initiative. The number of signatures collected to get a constitutional amendment on the ballot must be equal to eight percent of the gubernatorial votes cast in six out of the nine congressional districts in the 2004 election. Depending on the combination of districts, the number of signatures required ranges from 139,181 to 151,619.

Previous Post: « St. Joseph Loses Out on Bid for Premiere Jesse James Movie
Next Post: President Tells VFW US Will "Stay the Course" in Iraq »