Adam Kennedy was placed on the 15 day DL to undergo knee surgery.

OF Juan Encarnacion was upset with the way Tony LaRussa handled the situation with Rick Ankiel coming on board.  Encarnacion was hurt by the fact that LaRussa never privately came up to him to inform him his playing time would be diminshed with the arrival of Ankiel.

Who can fault LaRussa given the recent success from Ankiel at the plate and hustle in the field?  To add to that, Encarnacion is being looked at by team doctors for a sore knee that made him a late scratch in the lineup on Sunday. 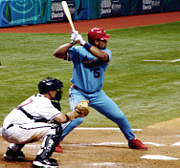 When the Cardinals open their series tomorrow with the Brewers, look for the Redbirds to be sporting their retro 1982 powder blue uniforms as the Brewers celebrate their AL pennant of 1982.