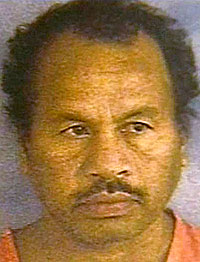 Nine charges have been filed against the man suspected of killing three people and wounding five others during a shooting at the First Congregational Church of Neosho on Sunday. The shooting occurred during an afternoon service held by a Micronesian congregation.

Newton County Sheriff Ken Copeland says Saimon is also a suspect in an alleged sexual assault of a 14-year-old female.

A judge has set Saimon’s bond at $1-Million, down from the original $5-Million. A preliminary hearing is set for September 18th. [UPI photo/Neosho Police Department]