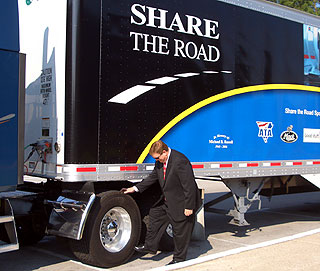 The American Trucking Association is taking steps to cut down on the number of fatalities on the nation’s highways.  The ATA’s Share the Road highway safety program tours the country, conducting seminars with professional truckers who educate the public as to the potential dangers posed by the combination of big rigs and passenger vehicle drivers who don’t take into account some of the tough tasks faced by truck drivers.

Steve Eckhoff of Stover, Missouri, is one of the professional truckers who recently took part in a Share the Road event in Jefferson City.  This 26-year veteran trucker says some of the dangers involving trucks and passenger vehicles occur when cars are passing the 18 wheelers.

"First off," says Eckhoff, "If you’re passing a truck you should be passing on the left side.  We have a smaller blind spot over there."  "If you’re going to pass a truck," he continues, "Pass the truck. Don’t linger off to our side."

There are four large blind spots around trucks where cars "disappear" from view and the driver can’t see the passenger vehicle.  When passing, car drivers are advised to get in and out of those blind spots as quickly as possible.  When getting back into the right lane, car drivers are warned it is dangerous to cut in front of a truck.  Fully loaded trucks weigh up to 80,000 pounds and take the length of a football field to stop.

And, the program is yielding results.  Steve Fields of Independence, Missouri, who has been behind the wheel for 22 years, says the response from the public has been tremendous.

"It enlightens people," says Fields, "They get up in the truck and they get to see, from our perspective, what we deal with – some of our blind spots."  He adds, "It’s really a good program.  It really enlightens people on how to share the road safely."

The American Trucking Association’s Share the Road program is sponsored by Mack Trucks and Michelin North America.  In Missouri, it is run in conjunction with the Missouri Motor Carriers Association, which represents the unified trucking industry in the state. [ Photo: Transportation Director Pete Rahn demonstrates where the rubber meets the road. ]