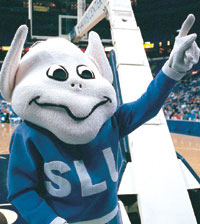 I never thought it would happen, but the Saint Louis Billiken was selected as the number one college mascot by the website SPMsportspage.com .  Part pig, part alien, part Teletubbie?  Not sure what it is, but it’s cute, sort of.  Thanks to the SLU athletic department, I found out what a Billiken is.

The Billiken is a symbol of good luck that became a craze in the early 1900’s.  In 1908, Florence Pretz, an art teacher in Kansas City, MO received a patent for her version of an ancient Asian figure.  A year later, the Billiken Company of Chicago adopted the likeness, hence where the name Billiken comes from.

The generally accepted version of how the Billiken is associated with SLU is that  two St. Louis sportswriters felt football coach John Bender looked like the creature when he flashed his big smile.  It stuck and the fans loved it…John Bender, isn’t that the dude’s name from Breakfast Club?

Congratulations to the Billikens and best of luck!!!