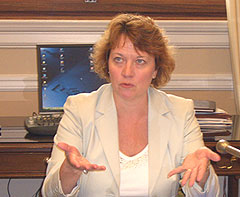 A state audit issues a caution about a popular mechanism used to pay for construction projects, mainly for major retail developments.

They are called Transportation Development Districts, first created in 1990, revised in 1997. Ninety-eight have been established in Missouri; 29 in 2005, 22 last year. Most are located in the St. Louis area; 32 either in St. Louis and St. Louis County with 15 in St. Charles. The Kansas City area has fewer of the districts. There are 13 in Jackson County, four in Platte County and one in Clay County. A few more are scattered here and there in rural Missouri.

State Auditor Susan Montee says they are a good tool to pay for major road construction, but she adds that her audit finds a problem: little public participation. State law allows property owners to petition the courts to establish a district and raise a sales tax. No public input or public notice is required.

While there are no state requirements, according to Montee, local governments can provide oversight. The audit does give examples of local governments, such as Lee’s Summit and Independence, providing oversight. Montee says there should be a state requirement for public notification at least, especially with 87 of the Transportation Development Districts using sales taxes to collect a total of more than a billion dollars.

Previous Post: « Lake of the Ozarks Tram Accident Seriously Injures Four
Next Post: Rolen Could Be Back This Weekend Against The Braves »