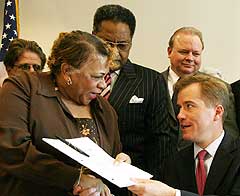 Governor Blunt is touting the benefits of the MOHELA bill as he is in the middle of a three-day tour of college campuses. Blunt is holding ceremonial bill signings of SB 389 on the campuses of colleges that will benefit from the conversion of assets from the student loan agency.

The main feature of the bill is its use of $335 million from the sale of Missouri Higher Education Loan Authority assets. The money will pay for capital improvements on nearly every college campus in the state. Noticeably absent are projects at the state’s largest university, the University of Missouri-Columbia. Senate leaders stripped money for the Columbia campus, because Columbia Senator Church Graham, a Democrat, led a filibuster against the bill. Photo: Missouri Gov. Matt Blunt shakes the hand of Mo. Rep. Ester Haywood (D-St. Louis). (UPI Photo/Bill Greenblatt)

Blunt points out the spending bill,  HB 16 , attached to the MOHELA bill contains funding for several University of Missouri projects. They just aren’t projects located in Columbia. Money has been set aside for the Delta Research Center, facilities in Atchison and Holt Counties, a biomedical swine research facility in Boone County, even a plant science research facility in Mexico, Missouri. Money also has been allocated for the three other University of Missouri campuses:  St. Louis, Rolla and Kansas City. UMKC, though, gets only a fraction of what the other campuses get, because Sen. Jolie Justus (D-Kansas City) participated in Graham’s filibuster.

Blunt has indicated he intends to restore a $31.2 million appropriation for the Ellis Fischel Center Cancer Center in Columbia. He says other projects for MU could be added later.

The MOHELA plan, officially known as the Lewis and Clark Discovery Initiative, had originally called for MOHELA to sell off $450 million in assets. It also was tailored toward life science research in an effort to help grow the emerging life science industry in Missouri. Concerns by pro-life lawmakers forced the governor to alter those plans. Missouri Right to Life and the Missouri Catholic Conference feared that money dedicated to Life Science Incubators at the University of Missouri-Columbia, Missouri State University in Springfield, Southeast Missouri State University in Cape Girardeau, and at UMKC could be used to fund embryonic stem cell research. Those projects were scrapped for less controversial ones.