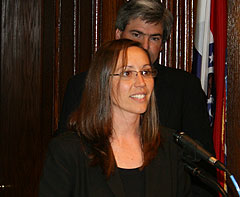 Governor Blunt today named a former agriculture advisor for Senator Talent as the new director of the Missouri Department of Agriculture. Blunt has named Katie Smith as director to replace Agriculture Director Fred Ferrell who resigned in disgrace after an Agriculture Department employee filed a sexual harassment case against him.

In naming Smith to the role, Blunt has appointed the first woman to serve as State Agriculture Director. The department was created in 1933. Smith was raised on a farm in northwest Missouri, near Platte City. She earned an agriculture journalism degree from the University of Missouri-Columbia. She has worked for both Senator Talent and Senator Bond as well as northwest Missouri Congressman Sam Graves. All Republicans, as is Governor Blunt. Smith served for four years as the chief policy advisor on agriculture issues for Senator Talent.

Smith has also worked for the United States Department of Agriculture and the federal Department of Energy. Smith, 29, recently moved back to Missouri with her husband Christopher and their daughter, Mary Agnes.

Smith’s appointment is subject to confirmation by the Senate.