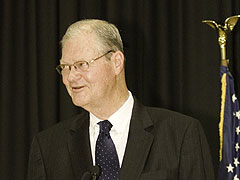 West-Central Missouri Congressman Ike Skelton, Chairman of the US House Armed Services Committee, expresses pessimism about the war in Iraq, but optimism about America’s future during a policy address at Westminster College in Fulton.

Skelton asserts the United States must engage in the difficult work of translating a strategic vision into effective operational decisions. Skelton notes that 61 years ago in the Westminster gymnasium, Winston Churchill encapsulated a unifying principle of a grand strategic vision in his famous "Iron Curtain" speech.

Skelton says the Iraq war makes it difficult to consider a strategic vision, "The horizon is clouded by the smoke rising from Iraq; it stings the eyes and blocks attempts to look beyond that conflict." The Bush Administration, according to Skelton, has made irretrievable mistakes in Iraq, "the realization of which was reflected when both the House and Senate adopted recent resolutions calling for the redeployment of our troops." Skelton says the country must recapture those things that spark imaginations, renew faith and give hope when contemplating the future beyond Iraq.

Afghanistan, what Skelton calls the "forgotten war", demands renewed attention. Skelton says that not enough resources have been devoted to the war there. He says that must change soon or the future of Afghanistan as well as NATO will be in jeopardy.

Skelton says leaders such as Winston Churchill and Harry Truman lead their nations not just through war, but they mobilized nations, economies and peoples. He says the United States needs to aspire to be the "indispensable nation".  To be the indispensable nation, according to Skelton, requires the strategic vision to imagine it, a robust economy, a domestic agenda that enables citizens to realize their full potential and a national security strategy that seeks to shape the world according to our national interests.

The readiness of the military concerns Skelton, "It is clear that the stress of continuous operations in Iraq and Afghanistan is rupturing the Army, and putting the Marine Corps under great strain." Skelton says the Army has degraded to a point where there is a risk of mission failure, what he calls an "intolerable situation". He calls for the rebuilding of the Army and creation of a Defense Readiness Production Board to identify solutions to critical military readiness shortfalls. Skelton also believes the Army should be larger.

Skelton concludes by saying that America faces as precarious point in history as the West did 61 years ago when Churchill came to Fulton for his "Iron Curtain" speech, "Still, we are the nation of great promise. The vision we exercise and the choices we make today will have a profound effect on the way things unfold tomorrow."