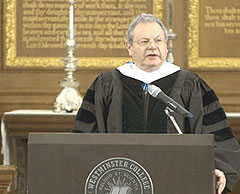 Gilbert says Churchill began with a belief in himself and his destiny, insisting that he would play a major role in British affairs some day. His capacity for hard work led one admirer to say he had a mixture of genius and plod. Gilbert says Churchill had an ability to inspire hope and that led to his ability to create and maintain national unity at a time of deep division within the country.

Gilbert says it’s hard to understand now how deeply divided Britain was in 1938 and ’39. Many in Britain found the country’s situation hopeless against Hitler’s German war machine that had taken all of Europe, leaving it alone. But that is the time Churchill rallied the country around what Gilbert describes as his clarion call of "No surrender".

Churchill had a concern for details, according to Gilbert. He says Churchill demonstrated personal courage by often placing himself in danger as he traveled to see things for himself. He had an ability to make hard decisions and Gilbert says one of those led America to trust the British prime minister.

When the French surrendered to Germany, the French fleet fell into German hands. Churchill ordered French war ships to be sunk in harbor, an order that would cost 1,200 French sailors their lives. Gilbert calls it a "hard, harsh, terrible decision" that convinced President Roosevelt that Churchill and his country had the backbone to do whatever it took to stand up against Germany. That led to Roosevelt’s decision to begin sending aid to England.

Gilbert says Churchill displayed both compassion and passion in leading Great Britain. Gilbert says Churchill was passionate in his determination to beat Hitler. Upon Churchill’s 80 th birthday, Churchill received many accolades, including one in which the speaker described Churchill as the lion to led Britain in war. Churchill replied that he was not the lion, but was privileged to be asked to given the lion’s roar.