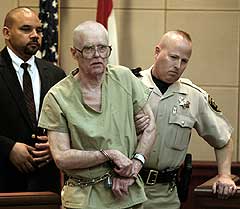 Kenneth Baumruk shows no emotion as he hears himself sentenced to death, again, for killing his estranged wife in a St. Louis County courthouse shooting 15 years ago. Baumruk killed her during a divorce hearing. He wounded several the people before a security guard ended the spree by shooting him in the head.

His competence to stand trial has been questioned for most of the 15 years.

His step-daughter, who was in the courtroom on the day of the shooting, says she wants to watch his execution – which is likely to be several years away. Baumruk will be 68 next month, the oldest prisoner in Missouri facing a death sentence. The oldest person executed in Missouri was Lambus Allen, who was 73 when he was gassed in 1944.   [UPI Photo/Bill Greenblatt]