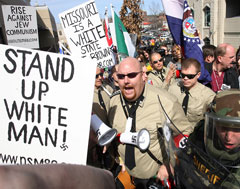 Seven arrests were made Saturday as about 20 members of the National Socialist Movement stage a march through a part of Columbia to protest what the Nazis say is the teaching of Marxist ideology at the University of Missouri. All seven arrested were counter-protesters, part of an estimated group of four-hundred showing up to jeer the Nazis during their march.

As the Nazis left a parking garage to begin their march around a quarter mile route, they began chanting racist slogans. A number of the marchers wore what some would consider the stereotypical Nazi uniform – brown shirts with armbands bearing Swastikas. Some carried flags and signs with racially charged slogans.

The chance for violence existed, but a heavy police presence kept the confrontations between Nazis and counter-protesters to a minimum. There was one confrontation in which police used made on a number of counter- protesters. By the end of the day, seven people – all opponents of the Nazis - had been arrested for various offenses. [ More photos ]