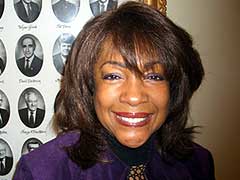 One of the original members of the legendary singing group the Supremes visits the State Capitol to testify on behalf of legislation that would prohibit any person from advertising or conducting a live musical performance in Missouri while using a false, deceptive, or misleading affiliation between the performing group and the original recording group except in certain circumstances as described in the act.

Mary Wilson testified before a Senate committee considering the legislation, SB 485 , but not before proving to those in attendance she is who she claims to be, entertaining those in attendance by singing a few lines of the Supremes’ biggest hits, "Stop! In the Name of Love."

Wilson says phonies are taking the names of groups that headlined during the early days of rock and roll. She says this hurts the artists whose identities are being stolen and the fans who pay money, thinking they are seeing the original artists when, in fact, they are seeing facsimiles.

Wilson says these pretenders might be very talented and entertaining, but they are not the original artists that they or promoters claim they are.