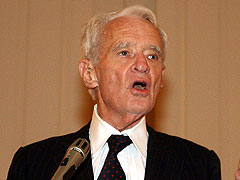 Flags at government buildings have been lowered to half-staff today in memory of former Senator Thomas Eagleton, who died this weekend at 77.

Governor Matt Blunt says Eagleton was a dedicated public servant and gracious gentleman. Congressman Ike Skelton calls Eagleton one of the finest public servants Missouri has ever produced. Skelton was an assistant when Eagleton was the Attorney General of Missouri.

Secretary of State Robin Carnahan calls Eagleton a personal hero, a personal mentor and a trusted family friend. Eagleton spoke at her father’s public funeral service at the capitol in October of 2000.

Eagleton was a strong environmentalist, opposed the Vietnam War, a Senator for 18 years, briefly a vice-presidential candidate. He helped get the Rams to move from Los Angeles to St. Louis, was one of those who most strongly encouraged Claire McCaskill to run for the Senate last year, and had an unfulfilled dream of someday being baseball commissioner. [ UPI Photo/Bill Greenblatt ]