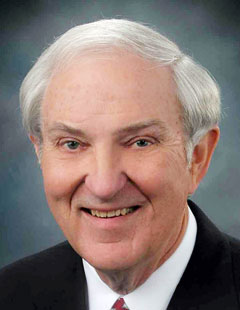 Governor Blunt asked for the resignation, effective immediately, after a former employee filed a sexual harassment suit against Ferrell last Friday, and seven female lawmakers circulated a letter demanding Blunt explain how he could allow Ferrell to continue to serve….

A woman employee has accused Ferrell of kissing and touching her, saying he wanted to see her in a wet t-shirt contest, and refusing to promote her because she is a woman.

The allegations first came up last year. Ferrell was briefly suspended and told to enroll in sensitivity training and pay a fine. He issued a public apology but the Governor’s office refused to release the specifics of the allegations or a copy of a highway patrol investigation that was illegally ordered by the Govenror. Ferrell had been considered a probationary employee since then.

Deputy Director Matt Boatright will serve as an interim director until a new director is picked. [UPI Photo/Handout]