By a vote of 5-2, the Missouri State Board of Education , meeting in Jefferson City, votes to begin the process of taking control of the St. Louis School District from the elected board and setting up a three-member transitional board to run the school district. 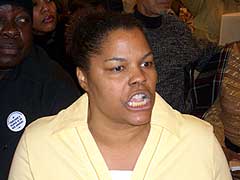 The State Board knew there would be a lot of interest in this decision, and moved its meeting from the State Board of Education offices to a Jefferson City hotel, to accomodate the anticipated crowds. Dozens of angry parents and union members crowded into a conference room to witness the proceedings, which were delayed because of rowdiness on the part of some of those bused in from St. Louis. [ Photo: Protester Maxine Johnson of St. Louis at Board of Education meeting .]

The vote leads to the creation of a provisional board which will be made up of one appointee of the Mayor of St. Louis, one from the President of the St. Louis Board of Aldermen, and one from the State Board of Education who would formally be appointed by the Governor.

This Board will wait in the wings until a decision is made on whether the St. Louis Board should be unaccredited. That decision could come at next month’s State Board meeting. If the decision is made to strip the district of accreditation, the transitional board takes over and could remain in place for up to three years.