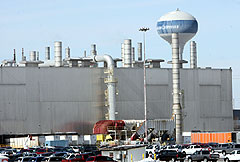 DaimlerChrysler’s restructuring will cost jobs in Missouri, but won’t be as drastic a blow to the state as feared. Rumors ran wild in St. Louis that the auto maker would close its truck plant in Fenton, one of two production plants it has in the area. Instead, DaimlerChrysler has announced it will lay off a shift at the South Assembly Plant, which manufactures minivans. [UPI Photo/Bill Greenblatt]

The auto maker has not disclosed how many jobs will be affected. Overall, 13,000 jobs will be eliminated as DaimlerChrysler reduces costs in an effort to restore profitability. A news release issued by the manufacturer says the goal is to turn things around by 2008.

DaimlerChrysler will reduce production of its Ram pickups, but not in Fenton. The company says that it will eliminate a shift at its Warren, Michigan truck plant this year. The elimination of the minivan shift in Fenton won’t occur until next year.

Company executives say the Chrysler Group’s business has been too heavily weighted toward minivans, trucks and sport utility vehicles. Chrysler Group President Tom LaSorda is quoted in a news release as saying that the rules of the global marketplace have changed with high fuel prices driving consumer preferences to smaller, more fuel-efficient vehicles. Earlier, DaimlerChrysler had announced its fourth-quarter earnings had dropped by 40% on weaker demand from Chrysler.