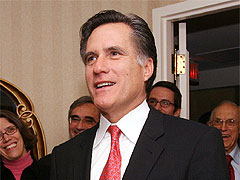 One of the people considering entering what is expected to be a crowded field of Republican presidential candidates pitches his ideas to Missouri Republicans gathered in Frontenac in St. Louis County for the GOP’s annual Lincoln Days weekend. Former Massachusetts Governor Mitt Romney (R-MA) was the guest speaker at Saturday’s dinner highlighting the annual event.

Romney’s speech to an estimated 700 party loyalists touched on themes dear to Republicans. Among them: The importance of fighting the war on terrorism, the need for energy self-sufficiency, and the desire to limit government.

In a news conference prior to his speech, Romney praised Matt Blunt, saying the Missouri Governor has been a big help in efforts to make Romney better known. Romney says he and Blunt see eye to eye on so many things, adding Blunt is leading the Romney efforts in Missouri. Romney went on to says it is essential for anyone running for the Republican presidential nomination to get acquainted with the people of this state and its elected officials

The news conference gave Romney an opportunity to discuss some of the concerns that have been raised over his religion and his positions on such issues as gay marriage and abortion. On being a Mormon, Romney said, "People in this country want a person of faith to lead the country, but they don’t make their decision on who they’re going to support based on the particular doctrines or brand of faith, if you will, that that person has. They instead look to see whether they share values on the issues they care most about, and I’m pleased that the values that I have are very much in line with the base voters of the Republican Party."

On the social issues, Romney says he has always opposed gay marriage and continues to do so. As for abortion, Romney told reporters he had been pro-choice, but changed his position, "about two or two and a half years ago."  He says, "Now, I am firmly pro-life."

Romney is set to formally announce his candidacy for President on Tuesday in Dearborn, Michigan. [UPI Photo/Bill Greenblatt]