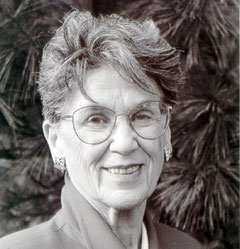 Harriett Woods, the first woman elected to statewide office in Missouri, has died. Woods died of complications from leukemia. She was 79.

Woods, a Democrat, was elected Lieutenant Governor in 1984, two years after a narrow loss to incumbent Republican United States Senator John Danforth. Woods worked as a journalist before entering politics. Woods won her first office in 1967 when she became a member of the University City Council. She was elected to the Missouri Senate in 1976 and again in 1980. She made another attempt at US Senate, but lost that race as well, this time to incumbent Senator Kit Bond.

Woods left Missouri politics and served as national president of the National Women’s Political Caucus. After stepping down from that post in 1996, Woods assumed a behind-the-scenes role in state politics as she kept up a teaching and traveling schedule. In 2000, her book Stepping Up to Power:  The Political Journey of American Women ,was published.

Woods was diagnosed with leukemia last year. Despite the illness, Woods traveled to Washington, D.C. to witness the swearing in of Senator Claire McCaskill last month.  Woods died Thursday at her home in University City. [Photo UPI Files/Bill Greenblatt]

Statement from Chairman Roger Wilson:
"Harriett Woods was a true trailblazer in Missouri politics. As seatmates in the Missouri Senate, I got to see firsthand what a truly independent thinker Harriett really was. Whether it was championing nursing home reform or fighting for opportunities for women, Harriett’s passion and principles were unmatched. As the first women ever elected to a statewide office in Missouri, Harriett will always be remembered for opening the doors of public service for generations to come."