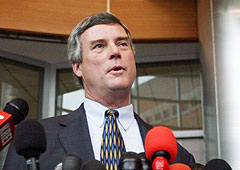 71 new charges have been filed against Michael Devlin, the suspect in the kidnapping of Ben Ownby of Beaufort last month and Shawn Hornbeck of Richwoods in 2002. St. Louis County Prosecuting Attorney Robert McCulloch has announced he’s charged Devlin with one count of kidnapping and 17 counts of forcible sodomy in connection with last month’s abduction. And, he says he’s charged Devlin with kidnapping and 52 counts of forcible sodomy relating to the 2002 kidnapping. Both boys were found at Devlin’s Kirkwood apartment. Devlin already faces charges filed earlier in Franklin and Washington Counties. [Photo: Bill Greenblatt/UPI]