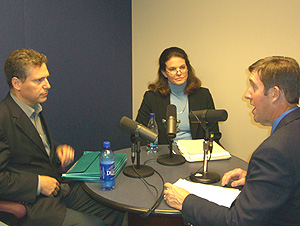 On November 7th, Missourians will vote on a constitutional initiative that would, in effect, allow Missouri researchers to conduct any stem cell research that is permitted under federal law. The issue has sparked heated discussion throughout the state. One side believes this is the route to curing numerous diseases. The other sees it as a path to human cloning.

Donn Rubin, Chairman of the Missouri Coalition for Lifesaving Cures

The Missouri Coalition for Lifesaving Cures is a broad-based coalition of concerned citizens, patient groups and medical organizations working to protect stem cell research and patient access to stem cell treatments through the Missouri Stem Cell Research and Cures Initiative, to be on the statewide ballot in November 2006.  Mr. Rubin also serves as Executive Director of the Coalition for Plant and Life Sciences, an organization comprised of top civic and academic leaders whose mission is to position Missouri as an international center for biomedical and plant sciences research and industry.  He was recently appointed by Missouri Governor Matt Blunt to chair the Missouri Technology Corporation.  His prior work was in international development, assisting the new democracies of post-communist Eastern Europe reform their legal and health care systems.

MAHC is “a coalition of individuals and organizations dedicated to promoting ethical science, advancing realistic medical treatments with adult stem cells and opposing the practice of cloning human beings for research purposes.” Representing MAHC in the debate will be Executive Director Jaci Winship. Ms. Winship received her Bachelor’s degree in business administration from the University of Missouri, Columbia.  From 2000-2006, she was the vice president of Meeting Resources, Inc. a St. Louis based Meeting Planning and Incentive Travel Company.  Prior to 2000, she was the Director of Operations for Lay Renewal Ministries; a portfolio manager for Mercantile Trust and a financial consultant for Merrill Lynch.